Illegal quarrying in the reserve area of the Central Philippine State University in Kabankalan City, Negros Occidental, caused P5 million worth of destruction to the environment, its president, Dr. Aladino Moraca, said yesterday.

Moraca said the quarry operator, without any coordination from CPSU officials, managed to bulldoze a road into the river bank behind the campus.

He added that the quarry operator secured a permit from the Provincial Environment Management Office without informing them.

Moraca also said that a road network for the dump trucks and other heavy equipment has been completed, and a batching plant was built without the knowledge of the school.

He, however, said that they stood their ground to protect the environment within its reservation area in Sitio Mansumbil, Barangay Tagukon, Kabankalan City.

With the help of PEMO and the city government, Moraca said they were able to stop the quarry operations that destroyed the terrain in the area.

CPSU has a total reservation area of 4,653 hectares, which, he said, “should be protected for a lifetime”.

“We should take care of our environment and this is non-negotiable,” Moraca said, adding that he received threats for standing up for what he believes in.

“We are now formulating a rehabilitation plan for the destroyed area,” he added.

He also said that CPSU is coordinating with the Office of the Solicitor General on legal actions against the people behind the illegal intrusion into the reservation area of the school.* 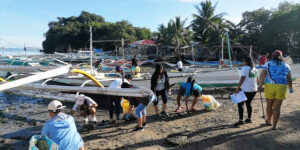