Every now and then, Filipinos put all their hopes and dreams on the shoulders of one person, expecting that person who has been tasked to represent our poor country to embody everything that is beautiful and perfect about us.

During those few days, we expect that compatriot to possess flawless beauty, display unmatched wit, fight for a worthy advocacy, and to never let us down. Every word uttered, step taken, shimmy of the hips is analyzed and constant, continuous improvements are demanded. We don’t accept excuses or jokes and the whole nation rallies together behind that exceptional person who has been screened, trained, groomed, and drilled to perfection during the run up towards the greatest test a person of Philippine descent will ever face.

This ritual of searching for and creating the best version of the Filipino people we can possibly present to the universe that sounds like a critical moment in our history is unfortunately directed towards the annual Miss Universe beauty pageant that was held yesterday instead of our never-ending search for good and decent leaders for our country.

In the past few weeks, during the run up to the Miss Universe Pageant in Florida where the Philippines was represented by the stunning Rabiya Mateo who hails from Iloilo, we had expected the poor lass to transform into the best version of the Filipino in the damn universe as she prepares for the showdown to win the coveted crown and title that seems to have immense value only to this beauty pageant crazy nation.

A lot is on Ms. Mateo’s shoulders as we gun for our fifth Ms. Universe crown. She has to possess a universally beautiful face, a figure that rocks in an evening gown and a swimsuit, and the preternatural ability to answer questions like “how many islands does the Philippines have” with the legendary wit of her predecessor who, without batting an eyelash replied “high tide or low tide?”

Our Ms. Universe candidate cannot trip, stumble, or lose composure. She has to learn to sashay with the grace of a queen. She must be able to bear upon her shoulders up to more than 20 kilograms worth of costumery, all while smiling effortlessly and looking radiant. She cannot make tasteless jokes because there will be no one to explain why the universe failed to get her unique sense of humor after the fact. If she must make a joke, it has to be universally funny. Not just for her Bisasya or Ilonggo diehard fans.

If she fails to make the top 20, it is going to be an embarrassment for the country and heads will have to roll. The best and brightest experts of the Philippine beauty pageant industry will have to submit courtesy resignations. The ombudsman might have to do actual work to correct such an injustice. A joint investigation by all 3 branches of government will be necessary to ensure that such a failure never ever happens again. Our great depression will have to be remedied by the addition of more dolomite sand to Manila Bay. Our great dear leader might have to act decisively by having another a serious midnight talk with his people whose great standards and expectations were failed by a 20-something year old woman.

The best and worst thing about Ms. Universe season is that it reminds us that Filipinos are capable of having high standards and expectations. When we expect Ms. Rabiya Mateo to be the best in the universe so she can bring home some sort of crown and not embarrass our country that has already won this beauty pageant four times, it means that maybe one day in the future, we can also consider imposing standards on other Filipinos, especially those in leadership positions whose actions and inaction impact a hundred million lives more than just another a twinkly crown.

If we can have absurdly high expectations from our candidate to the Miss Universe, isn’t it high time we think about the standards and expectations we apply to the Filipinos who have sought public office and will be seeking public office in next year’s general elections?* 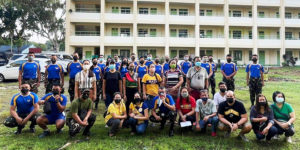